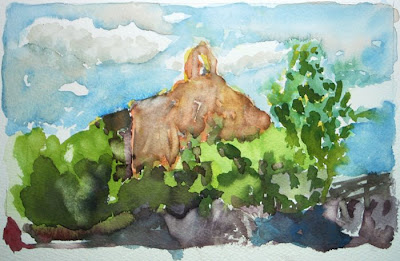 What do you do when you only have forty-five minutes to paint plein air? No, the answer is not always "don't post it." Why, it's, "Use a big brush, don't sweat the small stuff, and call it a 'study,'" of course. It's not very successful, but it gives an impression of foreground growth, building and sky. Sometimes, trouble can be instructive.

Lessons learned — which is sunnier than 'post mortem', no?

First I painted graffitti, then I got tagged

Tagged -- by Karen and, because I waited too long, by Silvina. By now, no one who visits this site doesn't know what it is. How do I know that? Because, I can do math. You're all from sites that recently got tagged.

You know, some schools don't permit kids to play tag... the school psychologists say it's emotionally scarring. It's a way of picking on the unpopular kids, who are never able to get "untagged," since the clique of popular kids target them. (My sense: those kids are bullies, whether tag is played or not. Fix the bully, because you haven't solved anything by banning the game.)

Now, there aren't any bullies in this game -- except for maybe that first person. It's actually a great idea (until you get into this ponzi-scheme math), a way of recognizing someone, of getting people to write a little bit about themselves, and to pay the compliment forward, so that lots of people are sending lots of people to look at lots of other people. It is a 'rolling theme', providing interest and variety... and I'm complimented that both Karen and Silvina have tagged me, because they are kind and generous and talented (and running out of candidates already, I imagine.)

So, here are my little-known facts:

At this point, I'm going to break the rules, because everyone else on my blog roll has already been tagged this month, or I just don't know them well enough to tag, and I can't overcome my anxiety about the possibility that I'd be rejected out of hand, and I'm not a very friendly sort, so I don't have any other friends.

I guess that makes eight true, but little-known, things.

But, to round out the people on my blog list that I don't know well enough to tag; if you aren't already familiar with them, do go look at the blogs of (in order of latest update):

Bob Cornelis, who poses hard questions about art and artmaking
David Lobenberg, an accomplished watercolor teacher
Deb Schmit, a terrific western landscape painter
Frank Gardner, a landscape painter living in Mexico
Karin Jurick, who has a body of work about people looking at art, which is cool
Kathryn Law, who is a sunny impressionist, now in Italy.

... and David Cornelius isn't willing to play, but everyone should have a look at the story of his moleskine-exchange project with his international art friends. 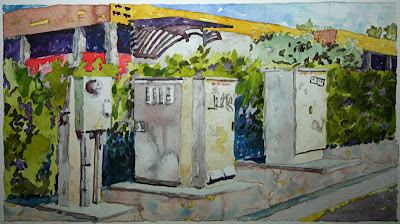 A new project. I've been seeing these marks -- graffitti -- around me, and I'm inspired. This set of utility boxes have been a constant target for tagging. Tagging strikes me as a futile, nearly hopeless attempt to mark territory. In our area, tagging is soon erased, making a pristine new surface for the next writer's scribble, each in rotation.

For artists, perhaps grappling for exposure in galleries or museums, taggers may seem like anti-establishment outsiders, looking for their own shot at a moment of notoriety.