Still image from Untitled, 2009
A funny thing happened on the way to the Massachusetts Museum of Contemporary Art. No, really funny, ha-ha funny, not funny-peculiar. We streamed an indie film from Netflix, called [Untitled]. That's the title: [Untitled]. It's set in the contemporary New York art world. Out last year, it stars Adam Goldberg, Marley Shelton, and Eion Baily, with a supporting role by Vinny Jones. The film is laugh-out-loud funny, if you've ever had anything to do with art, or wondered why some things get chosen as 'avant garde' and others get passed over. [My site-safety software has tagged the movie's web site, www.untitled-themovie.com, as "untrustworthy", so I'm not sending you there, but here's a trailer from youtube:]

Adam Goldberg plays Adrian, a struggling experimental music composer. He drops lines like "melody was invented by corporations to sell pianos" as death knells to tonalism, the professional 'outsider.' His compositions feature wailing, torn paper, the sound of a metal bucket being kicked, and clarinet. He becomes involved with Madeleine, the Chelsea-style gallery owner that is representing his brother Josh, a commercially successful abstract painter whose work is bought in the back room, in large quantities, by corporate collectors who are looking for big, colorful works that blend into bland hotel lobbies. (Ouch.) Josh is expecting a solo show in the gallery, but Madeleine keeps turning him down in favor of showing her cutting-edge artists, like Ray Barko (Vinny Jones).

Ray, the super-self-assured artist arriviste is the kind of prima donna who spouts paradoxical nonsense like "history doesn't influence me -- I influence it." Barko's over-the-top work features taxidermy animals: a stuffed baboon smooching a vacuum cleaner, a deer in a barber's chair looking at his bleeding severed ear in a mirror, or a bobcat nailed to the wall, pheasants impaled in walls, or raccoons hanging from chandeliers festooned with pearls. His character's lines draw undoubtedly intentional comparisons to Damien Hirst, but it's worth noting that the work, as it was created for the movie by artist Kyle Ng, had more to do with the fact that Ng had a large collection of taxidermy than to the demands of the script (or producers), who originally asked for repulsive fountains and such.

The movie punches right through the issues of commercial art vs. high art, and the industry's fixation on celebrity and notoriety. It gleefully sends up the gallery scene, conceptual artists, speculating patrons, and the length and breadth of artistic angst and the desire for an audience. Untitled had us laughing and wincing, alternating between familiar hilarious absurdities, and the sting one feels from seeing someone you can't help but identify with, get slapped in the face by an uncaring world. Some characters worked their hearts and brains out, and failed to get a second look, but others, whose work seemed to be no work at all, are lauded as genius. I happily give it four stars, highly recommended for this audience.

The first time we got up to the Berkshires, we had time for the Clark Institute (tons of beautiful, classical European 14th-19th century work), and on the same day, a quick dash through the Williams Museum of Art (a fine collection of post-war modernist through post-minimalist work plus some themed post-modern shows), and that was it. Mass MoCA lay tantalizingly untasted, a few miles down the road. So, the MoCA was on the top of my list this time around.

I couldn't wait to see the Sol Lewitt retrospective [which turned out to be more conceptual than minimalist], was intrigued by the notion of an exhibit from Leonard Nimoy [which turned out to be a terrific notion executed with good technique, but little depth], and figured I'd have little interest in the material/process works [which proved to be wrong - it was very interesting]. I was hoping against hope that there might be some painting displayed, but understood that would be a long shot, since painting [have you heard?] is dead. [I did find paintings, in a back room. I'll try to post about that another time.]

The ground floor was allocated to "Petah Coyne: Everything That Rises Must Converge," a solo exhibition... 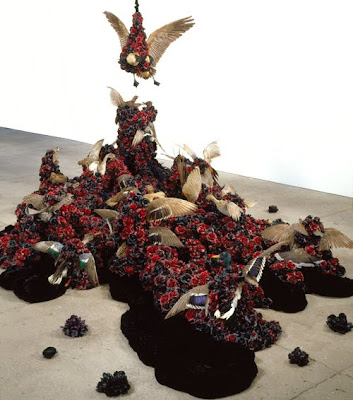 Other pieces featured a dozen peacocks in a jet-black iron tree. There were taxidermied pheasants, and ducks. Another involved ropes of pearls, and a chandelier. A bobcat and a bat made appearances. On entering the gallery, I had crossed a twilight line into a surreal, ultra-vivid version of Untitled. We walked about, counting coincidences, jaws slack, eyebrows raised. At any moment, one of the security people was going to turn to me and say, "You have an eye."

Even the gallery representing Coyne is in New York. [But then, how could it not be?] Suddenly cast into a satire, we laughed, snickered and coughed in our sleeves as we went from room to room.

Yes, the work is serious, and has an ominous presence of its own. Like "Untitled #1240 (Black Cloud)" it is uncomfortable, and the animals are posed in feral stances, mid-flight, fighting or mating. Some are half submerged, suffocating in fountains of waxed flowers. Black velvet and black forge dust soaks up the light and defies attempts to see it as more than a silhouette. It is a struggle of life and death. With a lot of death. But. it's. Barko.
Please understand, this isn't about the value, effectiveness or merit of the work. It's about the fact that we'd just had work like this broadly satirized, as over-the-top shock and awe art. With that frame, we were completely unable to see the work without referencing the joke, and so, we were thoroughly inoculated from being able to take it seriously. Just the fact that it made us 'uncomfortable' was a joke. As one buyer said in the film "It makes me deeply uncomfortable. And I think of that as a sign of the quality of the work."

MoCA said photos were allowed upstairs, but not in the Coyne show, which I take as an attempt to 'protect' the work from overexposure. Yet, when the most cutting-edge work in the museum screams "derivative" because of a parody film, it doesn't feel like it's cutting edge, regardless of who had the chicken, and who had the egg. It seemed like a parody of ... itself.
Posted by Edgar at 11:00 AM 15 comments: 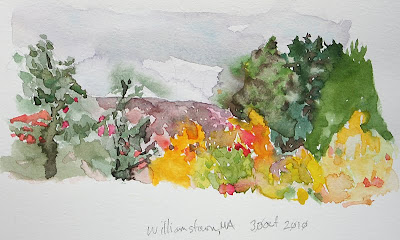 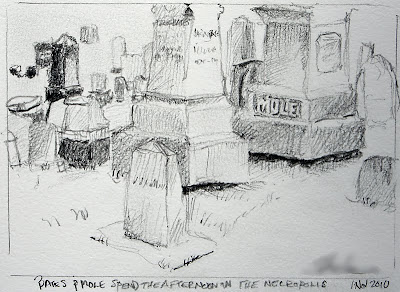 Be ashamed to die until you have won some victory for humanity. —Horace Mann
Posted by Edgar at 11:17 AM 7 comments: