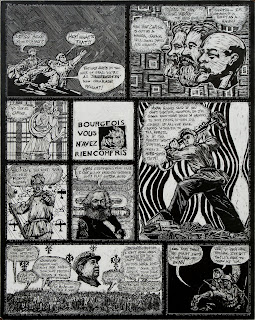 I had a conversation with an artist friend recently ... we were discussing our relative positions on "What is Art?" [yeah, I know: you know what you like]. I like to think that my definition of Art is quite broad, broader than the typical man in the street's. But I do make qualitative distinctions within that broad definition: I'm always asking myself, "Yes, but is it good Art?"

So, my friend and I, as I was saying, were talking-- and I was shooting off my mouth about the relative values of 'expressive', versus 'decorative', versus 'message' art. Now, I love me some pretty art... but pretty alone doesn't hold me long. I'm always looking for some other level, something to sink my teeth into.

When I look at paint, I can't help but viscerally feel the process of the creation. It's exciting to be confronted with a painting that's all energy, whether from the joy of discovery or from the frustrated struggle to get the paint to "bend to the will." I'll admit: if you pour your passion into your work, then I'm a fan-- and that's just a personal predilection, not a requirement.

So, we were discussing "message art" because this artist friend had just attended the opening of a show that she had a piece in, which was themed on "Artists Respond to Earth." I had gotten a look through the show's catalog, which had reproductions of nearly all the works, and had a rundown from two people who had seen the show. Now it's true, I hadn't seen the show itself. But I know what I like. A lot of artists had submitted works that were "message art." And a lot of that was...bad. And my friends -- both of the people who had gone to the show -- were of the same mind, but being of a kinder temperament, they didn't want to put it that way. Because judging seems harsh. But judgement is what we do. We need it to live.

I've heard arguments that there is no room in art for messaging or moralizing (Clement Greenberg, I'm looking at you). Now here's where I start diverging from the man in the street [and really dude, how smart can you be, standing in traffic?]: good art, bad art, decorative art, expressive art, conceptual art, naive art, finger paintings, a short piece of rope nailed to the gallery wall ... I appreciate them all. All of them get the full standing as "art." It doesn't need to 'move' me to get credit. I've seen works which turned my stomach, or made me ask, "Why?" and yet I would still concede they were good-to-great works.

Message art is dicey, because there's a line that one may oh, so easily, cross, where one's passion about the subject outruns one's creativity. It forms a division between what you want to say and what the art does. So here in the catalog were all these works, some of them decrying fracking, some showing a puppy with the Earth between his paws. [Look at the puppy! What a cute puppy! Look, he's got the Earth between his paws! Such a cute puppy! Mumm umm mmumm..!]

Some worked better than others. My friend's work was a mixed media piece, including leaves. I liked it, and not just because she was my friend. It fit the theme, and it wasn't heavy handed. And it's not that I disapproved of the messages I saw. Flammable water? I'm pretty firmly against that. And I'm not against saving the world so that giant puppies have something to hover over, in space.

As I was blathering, trying to articulate what it was about these works -- with messages I approved of -- that I didn't think the art was good. The craft was fine. The puppy was very nicely rendered. I realized there was danger in message work. You know what's on the other side of that line, the one between being passionate and wanting to instruct your audience, the one between expression and pedantry? It's kitsch. Triteness. The cliche. And if you want to go there, well, you better have your eyes open.

What is message art? It's art for a Greater Cause. Art which is no longer primarily a human connection, but is a Lesson, a Warning, or a Dogma... "That's propaganda," I proclaimed. And these kinds of bigger ideas, they can be a beautiful thing, when the artist's heart is opened and poured out. Think about the Death of Marat, or Goya's The Third of May 1808. But true emotions -- well, love is not shaped like the hearts in a deck of cards.

The scratchboard work above? Thanks for asking. It's a letter to my son... Message art, in the most literal sense. So, now I've really stepped in it, right? Feel free to pile on.

To be sure, my message is 'aimed' at my son. He knows me. We have a history--and with that, there are inside jokes. Which means a more general, blog-reading audience isn't going to "get" all of it.

All the images are from communist propaganda, over a hundred years worth. (Don't quote me on that. The guy with the shovel might be Czarist propaganda. It's from a WWI recruitment poster.) In this piece I was thinking about how ideas come and go in and out of currency. I chose the concept because, of all ideas that are currently out of style, communism's way near the top. Capitalism has "won." Today, we're all happy Tweeters now, and there are no commies left.

But capitalism--and I don't think this is an ideological statement--is unquestionably a dead end, because before all the world's resources are even fully exploited (which would end growth, and capitalism would collapse), we're all going to be replaced by robots. I used to think about this, and I believed the economists' claim that we'd all be freed up for other jobs then. Jobs like "Robot Repairman." [They said the same thing about 'free trade' agreements. Yes, those made some new jobs... in international banking. But only so many people work in banking, because it's mostly done by computers now. And the number of jobs created was nowhere near the jobs lost. Yes, we export more now to those countries than we used to. But we import far more. A net loss. Moving all our jobs to the service sector, where we manufacture nothing except 'fries with that', has caused wages and living standards to fall. And besides, look what the bankers did.]

And now I know that soon, machines will be able to make and repair other machines. Then, with no way to earn money, how will we buy things from the people that own all the factories?

So, if it came to that, we would be forced to evaluate our options along the dividing lines of the basics: how will people eat if we can't buy food, and what would people do about it, if someone else is hoarding all the food? It could get messy. Substitute anything else you want, that's important enough: fresh water. Health care. A safe place to raise kids. Freedom from bigotry.

That's the background on the imagery. Yes, my tongue is in my cheek. Kinda. But the exercise is real: What do you do when your best idea turns out to be a dead end? Ideas are critical, every day. What are your art ideas? Where are they leading you? See, even there. You make judgements. And if it could be so, I would want my son to help make a better world. So, I wrote him a letter. It's fatherly love, and hope. Remember hope?

The uploaded image doesn't have enough resolution. Click the image. The Blogger viewer shows the image in a dark background. Right-click that image (in Windows), and choose "View Image." The JPG opens in its own page, and the cursor turns to a magnifying glass. Click again and see the full sized JPG. The tiny little text around the frames says this:


"It is ... possible to conceive of a science which studies the role of signs as part of social life...we shall call it semiology" -F. Saussure. What are the semiotics of facial expressions? Of famine? Of love vs. affection or admiration? How will we know the signs of moral rightness? How do we read the language of political weaknesses so that we may be forewarned? Because

what is the value of a signal which can only be decoded in retrospect? The fact that I rush to finish an opus in the anxious hours, waiting word that you passed safely under the eye of the hurricane is a sign of so many things. That I care if you live, and fret about how to know if you will succeed, and that I worry that I won't have had

the time--or will wait too long--to impart my full book of secret signs you must know to wage your campaign successfully. Imagine the power in Insurreccion Evangelica! I worry that

I will not live to see your greatest day. And I grieve in anticipation that I will have waited past my last chance to tell you "I love you." We leave signs as much to impart knowledge as an effort to

be not forgotten. Ideas are like capital, they acquire value according to their ability to generate more ideas. Ideas are fungible, and can be split, liquidated, exchanged, and hyper inflated. And, they are

used, sometimes, for corrupt ends. What value will "Life" have, when the machines control the means of production? Remember that large groups are nearly unstoppable but beware of the message from the lone gun man. Ideas are like child-

ren. They can be born, can grow with nurturance and will propagate in the presence of others. But if you should have a bad idea, there's no call to feed it. A better one will come along sooner or later. Beware reliance upon stretched analogies. Some ideas will live again in the resurrection to come, but some will claim the ideas weren't really dead. Some ideas mutate and evolve. And some will die in an asteroid winter.

How do we recognize the signs of a good idea? Ideas thrive, like life, in a gradient -- between hill top and valley. They might be impossible in a symmetrical universe. Look for them in contrasts -- without black and white, form would be indistinguishable from space. Sometimes an idea gets tarted up in a party dress, and looks good only be-

cause of tailoring. These are ideas transmitted by masters of semiotics. But some memes persist simply because they are broadcast by the highest-powered transmitter and they drown out the semiotics of other meme-carriers.

Having put all the work and thought and concern into the piece, I thought maybe it was worth sharing with a larger audience. Now I'm looking at you. Maybe--just maybe--I could start you thinking. Without being too heavy handed about it. The cliches? Those were chosen with eyes wide open. I'm not trying to convert you. I'm hoping you'll see things in a new way.