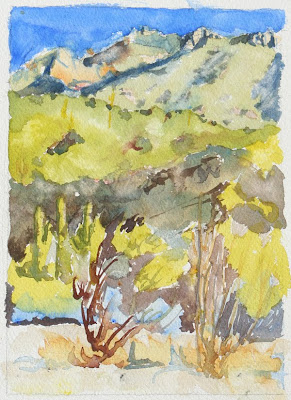 Catalina State Park, 2010.Watercolor on paper, approx 5"x7"
This view is of the north side of the Santa Catalina Mountains, which Tucsonans refer to as the "backside of the Catalinas." Catalina Park is about 40 minutes North of Tucson. With the [risible] budget shortage in the statehouse, the park is on the short list to close until revenues "recover". So, look now, while you can.

Our legislators have lowered taxes nearly every year for more than a decade -- despite having the lowest budget of many states, and an education expenditure which vies with Arkansas for the bottom of 50 states. When you're on the I-10 crossing from Arizona to New Mexico, you can hear the clunking, roaring, chattering pavement ruts go nearly silent as you cross the border into New Mexico, a state that knows how to take care of infrastructure.

It irks me that they would put something as fundamental to the common welfare (and to my inspiration as an artist) at risk, as a nature park. Let's make a resolution for the New Year that we take care of what's been given to us.
Posted by Edgar at 2:30 PM 12 comments: