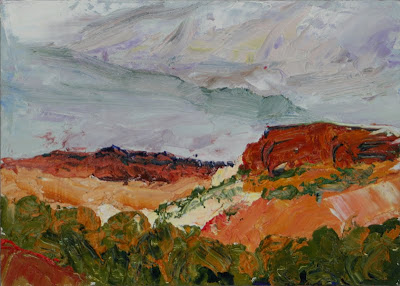 I'm mixing my two headiest liquors tonight, art and politics. Above, you'll see an uncharacteristic painting for this blog: an oil painting when Ms. Moments of Clarity swapped paint boxes with me in New Mexico. She painted a watercolor, I took up a palette knife and oils. We exchanged points of view, or at least media.

While reading my birthday copy of Art in America, I came across a review of Nader Vossoughian's Otto Neurath: The Language of the Global Polis. It's my first exposure to economist and philosopher Otto Neurath, and I was immediately drawn to his belief that the great masses of non-technical people could still make informed decisions about complex and technical subjects if they were informed in a clear and readily understood format of illustrated data. He experimented with graphic designer Gerd Arnz in creating iconic representations of economic, demographic and geographic data. These works are worthy of a museum show all by themselves.

In this experimentation, I've found a kindred spirit: my marks and sigil series is all about the complex communications embedded in our human landscapes, often in the form of icons and semiotics.

Here's the bit of political theory, a la Arty Fice. You see, when I was but a sprat, my family was temporarily in England, and I witnessed the parliamentary elections. I saw the commercials of both parties, and their debates and speeches. It was my first consciousness of political events, and I was quite taken up in the excitement of it. And, although I certainly was too young to grasp the difference between their stands, (and consequently to understand the difference between policy and "promises"), I was quite persuaded that Labor had all the answers, and that another round of Conservative policies was sure to bring the country crashing down around their ears.

Imagine my shock when the Conservatives were re-elected.

I pondered where I had gone wrong -- or rather, where the Brits had gone wrong. Mind you, I had no idea how bemused grown-ups would have been at my 12-year old effrontery. I wondered how it was that the majority of voters could have made the wrong choice. And I arrived at a simple conclusion: that voters in England had already made up their minds about the election beforehand, and weren't persuaded by the speeches and ads to change their minds. They weren't a "blank slate" as I had been.

From this, I realized my most important political truth: elections are not very important, in the overall scheme of things. I know, I can hear the shocked intakes of breath from my fellow Americans — at least those of you not so jaded as to be merely tsking and shaking your heads sadly (you guys are wrong, it's not that I think that voting isn't important, or that elections don't change things); only, hear me out, because I haven't gotten to the nugget yet.

The important thing, I learned, wasn't the election, it was the conversation beforehand. You see, before an election, there's a period of flux, where people can learn from each other, and hopefully gain support for their good ideas. In debate, conversation and education about the issues, minds get made up. Sides are chosen. Then comes the voting, and its just a matter of "taking a snapshot" of how many people are on which side at that time. In an ideal world — where everyone thinks alike — then there would be a consensus, and elections would be unanimous. Voting is just about ending the debate, and getting to a decision, rather than never getting a decision.

Back to the art

Yeah, it's true, I think that art is more than its formal qualities. I think that art has content. It bears content whether it's intended, explicit, or a deliberate attempt is made to make it non-referential or not: because art is a made thing (one definition I think we can all agree on). And made things have purpose, because we're beings with motivations. No one expends the calories or uses the resources or commits the time to making any kind of art without the expectation that the art fulfills some purpose. And no one can look at a made thing and not, on some level, try to work out what its meaning or purpose is—in communications, we call this "reading the text." We can't help trying to read the text of an object in front of us. [I'll have a more complete answer for you Clement Greenberg devotees, at another time...]

So Neurath uses rows of silhouettes of iconic people to represent thousands in populations, or the outline of an industrial building to represent factory jobs available in a country—and disposes of technical terms like "demographics" and "capital utilization" with a picture rendering the terms unnecessary. His vision and the work that comes of it are relentlessly modernist, but not for the causes that Greenberg sought, not for self reference, but for public reference. He believed in the innate intelligence and rationality of people—which is, at the very least, endearingly pollyannaish, Joe the Plumber to the contrary notwithstanding. It is a noble thing, to believe that art can grease the gears of democracy, strengthen bonds, and enable the betterment of lives.

Neurath employed vision and empathy in his experimentation and philosophy. He tried to put himself in the shoes of an ordinary person, without the tools of his economic education. In the spirit of walking a mile in another's shoes, my palette-knife painting at the beginning of this post is a tribute to the same mechanism: I tried to see things as Melinda does, however briefly, picking up her tools, using her color tubes.

When we stand before art, we get a glimpse into someone else's mind, someone's vision is shared, and it expands our own horizons. It is an ineffable human undertaking, at both ends of the transaction. Respect yourself, your art, and your audience and share a little 'life' with someone.
Posted by Edgar at 9:00 AM 2 comments: