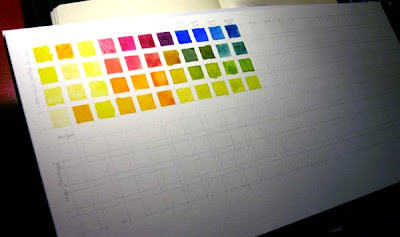 I feel like I've been offline for weeks, which is, while not literally, at least conditionally true. Overwhelmed with non-artist-tasks, I haven't got new work to post.

As proof of my continued existence, I have this modest start on a grid of mixing squares, which I dutifully began after getting the word from Deb Schmit that, without it, I could not seriously expect to get into Artist's Heaven. Having been raised Catholic, I understand the need to have one's checklists done before applying to the Powers That Be for dispensation, else Things may go Badly. Like so many penances, mixing squares feels a lot like work.

I don't know when I'll be able to paint again, but it's gonna happen soon, or I'll have to hold myself ransom, and ask for more proof of life. Great. Now, I've brought to mind that scene from "Blazing Saddles".

But, check out the paper block this is painted on: 9"x21" (23x48cm, for those of you that aren't from around here.) It's just a 140# Canson sheet, but, you see, I got that 'super panarama' format that I was envying of David Lobenberg's. So, now I can stop envying. Another mortal sin I can cross off my list!
Posted by Edgar at 9:30 PM 15 comments:

How art made me

I've subtitled this blog "Art musings and self-abusings," and my self-abuse is amply demonstrated by my various stabs at making art. So in the interests of living up to the name, let me post once without the art, as an "art musing."

As a person whose job is communications, I've long pondered questions like, "How is it that art came to be what it is?", "Why do I feel compelled to make art, even when it hurts?", "What is it about art that moves people so deeply (and some people don't seem moved at all)?" and "Is art important?"

At a personal level, I've answered all of these, but I know my answers don't apply to most people -- since most people don't go out of their way to make or view (capital "A") Art, they must feel differently about it than I. Nevertheless, despite the ambivalence that art is given in America, I see the world is full of art, and images, and objects that have clearly been designed with aesthetic considerations. As a marketer, I know that imagery is deeply affecting to the psyche -- at a deep, lizard-brain/subconscious level, marketers are able to manipulate feelings about products by using the right imagery.

One reason is the power of metaphor -- abstract thinking -- which is related to framing or how we view the world. Other reasons are being shown to me as brand new concepts in a series I've rented from my local video store, "How Art Made the World." My mind is being blown with each new episode.
Posted by Edgar at 5:24 PM 10 comments: