Someone stop me, before I art again 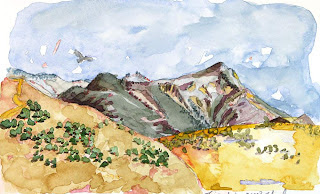 From my Moleskine sketchbook. This was done late in May at a terrific B&B/Artist's Retreat, the Triangle L Ranch. It's run by an artist in Oracle, Arizona, Sharon Holnbeck. The painting is a view from the porch of one of her cottages. It strikes me as slightly overpainted -- which brings up the question, "When to stop?" It's quite the metaphor in art. When to stop, indeed?

And I'm still surprised to see a bird in this painting. My attempts to include birds in paintings rarely add positively to the work. I paint them oversized, and stilted, so they don't add spatially to the composition.

That hawk kept circling around, though, like she thought she ought to be included. I was really struck by the presence of birds at the Ranch, everything from a family of horned owls to a cacophony of quail. Because of that heightened awareness, I think the hawk became a necessary part of the image; it was intrinsic to the place.

Is it just me, or are flocks of birds smaller and fewer between than a few decades ago?

It's not just you Arty, but world-wide I think. which is sad but reality. I personally think it is good that you are aware of birds when you are out painting. It shows a great perception(?) perceptiveness(?) whatever. I also try to include them whether they improve the painting or not. They are there and need to be recognised!
Good little watercolour carried out with verve. Don't stop but continue, with enjoyment. Welcome to the world of blogging! :o)

Thank you for the comment. I've been admiring your creativity, and am looking for ways to break some of the "rules" I've been taught in watercolor... but first, I'm looking for a little confidence in doing what I'm already supposed to "know."

I don't think it is overpainted - it is a nice work.