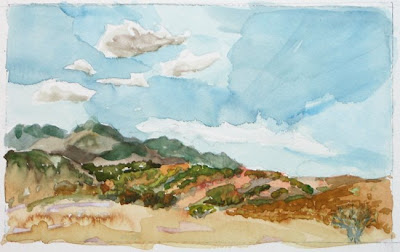 Near Madera Canyon, December 5, 2008, watercolor 8.25"x5.125" (21x13cm)
I picked up a 'how to' watercolor book a while back. It illustrated all these techniques that my instructors pretty much forbade me from using, like glazing, because (in the hands of an inexperienced student) they muddied colors.

And in the book, they'd do this thing, like putting down a coat of paynes gray before putting in some other color, to dull the color and make it look like atmospheric perspective, or shading. My teachers would have been appalled -- for one thing, Payne's Gray was strictly prohibited. (For another, we were supposed to pre-mix and put down the color and value as it is intended, not use layers, which was considered to be somehow polluting the purity of the original stroke).

But, I tell myself, I'm a big boy now. I can make my own rules. No longer a penniless student, I now own a tube of Payne's Gray -- I can use it if I want. There's more: I also now own one of my mentor's paintings... and he glazed. Man, did he glaze.

In this book, there was one particular exercise of distant hills with a castle on it, which I attempted. [My results were ... not unlike a painting by Bob Ross's least apt pupil.] I did the work to understand the concept. But, I didn't care for the result. In particular, I disliked the look of those "distant hills" with their two blurry layers, one of paynes gray and one of blue.

Yet, when you're out in the field, and there's this thing you want to do, and all you've ever seen for it is the one thing you don't like. So, you try to do something different, but no matter how you try, it comes out just like the thing you don't like. It's like when you're going down the road, and you see this pothole you want to miss, but if you keep looking at the pothole instead of the clear spot next to it, it's a fair bet you will steer your tires straight into that hole. And wince.
Posted by Edgar at 6:48 PM

Do you mean that the distant hills in this piece are those inevitable potholes? I kept looking and looking and could not see why you do not like them? What is it about them?

I think this Paynes gray technique worked for you. Those distant hills are out of focus and cool in relation to the warm and clear foreground. Great job on the clouds again.

I have a friend in California who has taken so many classes that a choir of disparate "rules' starts in her head before she can put brush to paper or canvas.

You are so good, and so critical of yourself. Is the criticism policy? Yikes. Here's your beautiful painting, just let it stand.

I think you have a consensus here, Edgar. Perhaps you should go a little easier on yourself.

If you want to play with the "potholes", you could wet and lift color from the foreground hills, or add a little glazing to the middle section of bushes. You could lighten the distant mountains, too, but I think you're absolutely wrong about the Paynes gray. Remember, the teachers were only talking about the foundations of process, not the way you have to work forever.

The looseness of your landscapes contrast nicely with the tightness of your critical self---similar to real life, eh?

Karen — I didn't like resorting to the gray from the tube. It feels like a crutch, and by putting it down, I got a cooler hue than the scene asked for, and blocked myself from getting any kind of shading into the mountains (shading that made sense). But, the story is more general than applying just to this one painting. I guess I'm confronting learned preconceptions in this piece. I want more than one arrow in my quiver... Thank you for your supportive view.

Silvina — Thanks, I really liked my clouds this time! And the sky came alive too. Happy happy.

Barbara — Thanks for the warning! I haven't frozen up with too much learning, yet. And I guess my comment was addressing the whole dialog that we carry on with our teachers, even after the fact.

Critique is a part of my process, and also a consequence of my medium, which doesn't forgive, or rework much. In criticizing my painting, I'm trying to improve my communication skills (I see art as communication, not just expression), and see my work as a process of self-training. Art is therapy for me, but it's not strictly play. So, I try to critique myself constructively and honestly. If I were working in oil, you would only see my critiques on intermediate stages of a painting... as a window into my thinking. Because oil is plastic, I'd just go back and make the changes I want to see.

Whether my painting reflects my "uptightness" or a "laid back-ness" ... maybe I have multiple personality disorder...No, that can't be it. Yes, it is! No, it's not. More like, that's what you get from a graphic designer with an attention deficit.

Something about those pot holes. I think they move right when I am about to pass.
Don't be so hard on yourself.
I just don't see what it is about those hills that you don't like.
I'm looking more at the ridge in the front and those sweet clouds anyway.

Thanks, Frank, for the encouragement and the visit.

[sigh]... I just want a different solution. I was aiming for something different, but wound up with the same old thing.

Even though everyone has given you so much "trouble" regarding the distant hills, I for one can say that I do understand that frustration about making the same move again and again in your paintings.

I think the frustration is because making the same move makes us realize that we all can only paint as much as we know at any given time and can't go any further without more information. And for me it pisses me off that I don't know or understand more NOW.

But then, suddenly, without realizing it, you'll reach for something other than the payne's gray...

Karen — Yes, I'm going to take the Paynes out of the pochade for a while, and then I'll have to make other choices. When I like those results, I'll put it back.

I totally relate to the "pothole" analogy - how often do I find myself sitting down to paint with some resolve to change what I've been doing only to find at the end of the session that I've managed to accomplish what I meant to avoid yet again! Wince... Actually not much different than the process we use to change most things about ourselves.