I've had this discussion with Melinda: "What's the important thing about the work we're doing right now, that it gets seen, or that it sells?" We have an agreement, pro tem, that we'd concentrate on getting it seen, and worry about selling later.

That's not to say that even showing work isn't freighted with emotional landmines. But Dinnerware was terrific to put together this show, taking all comers, throwing a kind of potluck, with several artists bringing big crocks of their best soups, and asking a small donation for ladles full of lovely hot home cooking.

I kind of thought the accordian was a fine bit of bistro atmosphere, too. I'm afraid I didn't get the gentleman's name, but he knew his way around the classic German folk songs. (And it was very kind of Melinda to take some photos to help me record the event.)

All together, music+food+original art on walls (and floor), from dozens of artists, gave the evening a welcoming, festive air. And made for an interesting and varied opening reception. The theme: to mark the passing of the last administration, and the entry of the new with art that dealt with the times.

It took me a bit of nerve to even submit my work for a show. I'm not sure I'm ready for an audience, so I was nervous to begin with. And, given the theme, the nature of the call to the artists, and the no-jury entry -- well, it goes without saying that the work is going to be highly granular in texture. Or maybe the metaphor is "all over the map." It's a big subject, and everyone's got a hobby horse to ride. The point is, Dinnerware provides a rare venue: a chance to display without value judgements intervening between the artist and the audience. This is important. It is not just freedom to be whoever you want to be... it's unconditional acceptance. 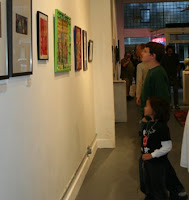 There were entries in ceramic sculpture, digital video, and large stenciled cloths on the floor. Paintings, drawings, prints, photos and collages. The content -- and let's face it, this was a highly charged theme -- ranged from lamentations to jubilant, from snarky to histrionic.

In one room there hung a 9 foot tall American flag, done entirely in black velvet -- even the red, white and blue bits. A Mac showed image collages morphing behind phrases taken from speeches by Martin Luther King, Jr and Malcolm X, while voiceovers from historic gatherings muttered along behind.

One artist took the front page of the New York Times, which featured an array of 9 photos from Bush's final news conference, showing his alternately combative, smirky, and defensive expressions. On each photo, a little "Hitler" mustache had been added. Some images challenged the viewer to accept a pair of nude white guys, or lampooned the "border fence", wherein America looked like the metropolis in the second Babe movie.

Yes, the show was cathartic. Yes, some was hilarious, some was haunting, some cliche-ridden. Some work was pointed, some blunt. Much was petty, some obscure to the point of opacity. Me, I liked the turkey soup, the whole-grain shepherd's loaf of bread, and the peppery corn chowder. Because, sometimes, a hot meal is as good as a come-to-Jesus altar call.
Posted by Edgar at 11:10 PM

Can you ever write!!! I wish I'd been there. And that's a powerful endorsement. As one who has organized and participated in many openings, this one sounds so great.
Food is usually the least important
ingredient in an art opening. But it shouldn't be. I wish you had a picture of your piece on the wall.

I'm glad you put your toe in the water, and your spoon in the soup, and that you helped make change happen.

Sounds like a good time was had by all!!
Are you glad you could share yourself through your own vision with your friends (and total strangers)?? I hope so...
I enjoy reading your thoughts and seeing your artwork online. Glad you share that way too!

I thought a picture of the picture would be redundant, since the image is posted below under "Retablo:..." For reference, the third photo is of people looking at my piece — or the one next to it, I'm not sure.

I'm ambivalent about being wet... but I'm getting excited about my work, so I won't give up on it because of my discomfort.

Marian— Good question. It was fun to be a part of a group of people that felt "involved" in the world (and excited about art), even if perspectives varied. But the work must stand alone: it isn't a proxy for me, and I don't want to get that confused in my head... acceptance of the work isn't acceptance of me, rejection of the work isn't rejection of me (I keep repeating to myself).

I say Congratulations for putting it out there, no matter what. That's difficult enough (and of course they're looking at the piece next to yours). (just kidding).

And bigger that even putting it out there is our own excitement with the work. It's like this surreal feeling of learning to make this work that then helps us learn about ourselves.

Thanks Karen! Yes, it's all learning.

I really like this concept of an artist's potluck/art gallery/themed show. Great space and lighting too.

I recently stepped up to the plate when the arts council in my town asked for a volunteer to organize events for the next couple of years. Yikes. All that to say, that's why this potluck for artists is of particular interest to me.

Just one question... Is that a photo of you with a spoon in the peppery corn chowder?

Hi Edgar..
Me again.. Just wanted to send you a "I love your ART BLOG award".

You can capture the image from my blog if you'd like.

Silvina—That would be me, stuffing my face.