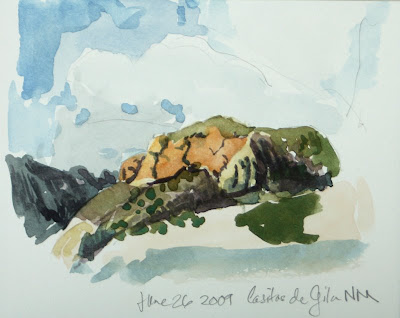 You're scary sometimes. Here's the secret, Nothing -- really nothing is a big deal, unless you think it is, and even then... you'll get over it.
I don't mean life and love, I mean the wheels that turn, the powers that be. I like the word Biennale, but that's because I'm going to be in the Florence Biennale this year. My Italian roots (a couple of generations back) are from Florence, but I don't speak more than a word here and there. I say don't knock the Biennales until you've tried them, and good for Miss
Moments of Clarity. She belongs in every Biennale as do you. Love your painting.

Thanks for sharing the secret, Barbara! I'm completely in agreement -- and you, Melinda, and all the other Biennale participants deserve all the exposure and recognition you can get. I know I love a good art show.

But as for the secret: could you forge it into a mystical cross, that will slay the Powers That Be? Because what really torqued me isn't that there's going to be an art show so big it takes two years to make it happen (that's better than the SuperBowl!), it's that the Powers That Be want to take credit for a) determining what's important b) shutting out millions and c) being a more awesome and jealous Power That Is than all the other Powers that Are. That's right: they mostly criticize each other about how to put together the biennials. News flash to the Powers That Be: it's not about YOU.

Did you know there is a "Biennial of Biennials?" I guess that's where the aesthetic-theorists-turned-arbiters-of-Truth share info on where to timeshare in the "off" years.

Good to hear from you again Edgar...

Got married in Venezia, but don't even pronounce my own name the correct way.... Should be 4 2 not E... instead.... fortune ahhh tiii

Glad you are on the blogscope again!

Okay I know what you mean. It's the art snob thing that's bugging you. I used to work as assistant editor of an art magazine. Oh colour field where is thy sting? At the time a canvas had to be all one colour and nothing else to be considered "good".
Now the downtown galleries are all high realism (which I seem to have been doing this week -- unconsciously moving towards placating maybe? OMG!)

Thanks for making me think about it. Having been up to my eyeballs in that world, I no longer worry about it. Dead rabbits in glass car crashes,and other gruesome subjects in 3D using real rabbit carcasses. It doesn't matter. You decide what's good. You are. Melinda is. You believe it.

One of the best memories of our drive through New Mexico was your reading the Biennial article in Art News. We all laughed and laughed as the junipers, chamisa and storm clouds watched as our car raced by returning to Tucson.

What fun. I'd like to read some more of your thinking on this subject. The author had some interesting things to say and you could expand on them.

Good read Edgar, and nice sketch.
A good friend of mine is always wondering if we are the only ones who realize that the jurors in many of these shows are often our contemporaries and in competion for wall space in galleries, huh?!

Speaking of "Art In America" I just finished reading Ron McClarity's novel of that title, and if you get past the first couple of chapters your sides will be sore from laughing out loud as you continue! I made the mistake of trying to read it while recovering from a very sore bad back...yeah "it only hurts when I laugh", became a whole new adventure!