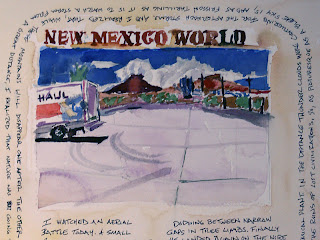 This is presented with many thanks to Ms. Clarity for letting me tag along in New Mexico. It is always an inspiration to see you inspired. And, many congratulations as well, to Artist Melinda Esparza, artist-in-residence at the Grand Canyon. Your talent and hard work well deserve the honor.
Posted by Edgar at 8:21 PM

Always pleased to see that you've written, and painted. Your intense observation reminded me of a book I just read called The Anthologist by Nicholson Baker, one of my favorite books in the past year. What a pleasure to read this post. Please accompany Ms. Esparza on more journeys, and document these trips. Congratulations are definitely in order to that hallowed artist too.

The persistence of that dove, and Mother Nature's rains -- not to mention Ms. Esparza -- are something to be reckoned with!

It was a thrill sitting there having lunch along the Santa Fe River, watching that small bird and large raven. I'm so glad that you posted about it.

Thanks, too, for the mention.

Barbara,
So nice to see you again, and I'm grateful that you'd stop by and take your time to read.

Artist Melinda is definitely making waves, and it's a real privilege to see the work she does.

Donald,
I did learn a lesson from the trip, through nature and the other trials that Melinda went through. One lesson: It's easy to be intimidating when you're a momma bear. It's another order of respect when you can be an intimidating dove.

Melinda,
The observation was truly an exciting series of moments for me. As you've documented, so much is puzzling about that trip, it was a relief to have some things that provided my own 'moments of clarity.' :-)

You're right, I need to make some more art, and I think I need to rework this one a tad to see if I can take some of the cartoonishness out of it.

I have another work nearing completion... one I've been working on for a long time. Hope to post soon.

Enjoyed reading your last few posts, your blog is very captivating. Thanks for the inclusion on your blogroll; much appreciated.

Wonderful sharing. keep it up my dear. i will revisit your blog.