Looking ahead, behind and inside 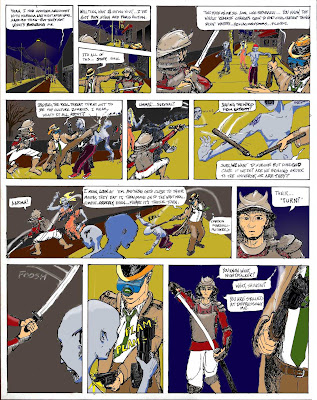 The cool thing about a mail art piece -- in my case (with all due deference to Ms. Clarity, goddess of mail art in my circle)*-- is that, the nature of the audience is generally better known than the audience for a piece of work that "nobody asked for." I created this piece as a letter to my son.** It embodies a great deal of 'code' that, had I been designing for the public, would have been simply enigmatic.

As an example: For my specific audience, we have shared the fun of things I read to him as a child. Comics were a special treat brought on camping trips, and often read by flashlight. He understands why I chose the comic format, and immediately has a deeper connection to my choice of medium than if I'd chosen something else. But today I have an adult audience (0f one), so the format no longer speaks as to children. Here, themes concern the notions of dreams as opposed to work; love as something that happens in the midst of life... and the human capacity to render even the most outré and specialized activity banal.

But, let's just say he couldn't "get" all of it. But if you are of a certain age, you'll understand if I say that Darren McGavin and James Clavell made an impression. And Ben Stein has been a disappointment.

But as a letter, father to son, it embodies my qualms about the future (his future, I guess), a few nods of the head to his childhood, and still manages to be a personally soul-searching endeavor, if comic-book action-opera and humor qualify as soul-searching. I did get some decent psychological benefit from the exercise, but it may have cured me of my notion to make a body of work consisting of single pages from mythical comics... those guys (and they're almost all guys) work hard for the money.

*Ray Johnson, the likely originator of mail art as a massively interactive work of collaboration and unlimited reproduction, had a different notion. Call me parochial.
** Reproduced here with permission of the original audience.
Posted by Edgar at 4:44 PM

Nicely done, Edgar. My thoughts almost exactly. You were very successful with this piece and I know your boy got a lot out of it, even if some of it was unconscious. Reviewing some of Ray's work also felt as though I was looking at a private conversation with one other person, not me.

I enjoyed watching your process and the fact that your approach was completely different from mine, yet having the same start point--Ray Johnson.

Do some more mail art someday.

Well, Ray had what he half-jokingly referred to as the NY School of mail artists, who had a thing going, and I'm sure it developed its own inside jokes and cross-references.

Beautiful thing I heard: when his body was found in the bay, word of his death spread partly by mailart. How great is that?

Thanks for being 'frist,' Melinda! I'm always honored by your considerate comments.

Edgar, this is great. And, a very special creation to give your son. I like your "camera face gun guy".

Thanks Linny. Nice of you to take a close look. :-)

Wonderful mail art. I was absolutely delighted with the post and the amazing art and your writing. What a lot of superb work. We too used to read comic books to our kids until they were old enough to squirrel them under the covers at the cottage after it was lights out. My son who has moved out must have at least 500 comics left in his bedroom here, and they are all "important."

Love the whole idea of mail art, although I know I have not got the
patience to produce any.

Barbara,
So nice to see you here! And thank you for the kind words.

Certainly you can do mail art: just get a hell of a lot of stamps, put them on the back of one of those canvases, write a "To:" address, and you're off!

Simply put i surfed by way of your website as i designed to end up keen on just one elements as well as the detail. Gathered solid creative practices appropriate that follows! Let’s hope you do not pointers generally if i refer to your during my own blogging and site-building location web content inside the long haul